I previously wrote a blog on the “Beauty of Discontinuity“, and since then this topic has been swirling around my imagination. I’m convinced that God is intent on interrupting our lives to capture our attention, to bless us, and to redirect us onto new paths — and that he calls his followers to live discontinuously with the values and priorities so often seen in the brokenness of the world.

If that’s the case, then should “continuity” play a role in our lives? Absolutely. Continuity is essential to life and has its own kind of beauty. We see healthy continuity…

Without any continuity we’d be lost. Life would be a like a box of random events, constantly being shaken about (like a never-ending episode of “24”). 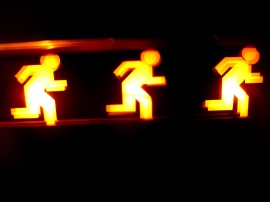 Though a certain level of continuity is crucial for a healthy life, it seems that our human tendency is to eventually succumb to these patterns so that they take over much of our existence. We can become so entrenched within these “normal” patterns of life that continuity eventually turns into bondage. The rhythms of my life begin to take on a treadmill-like reality, so while I’m going through the motions, no progress is being made. I’m no longer getting anywhere I haven’t already been — no new discoveries, no more breakthroughs, no new beauty.

It’s been said that a rut is nothing more than a grave with its ends kicked out. And that’s a good picture of a life of continuity that isn’t punctuated by moments of significant discontinuity.

My hunch is that many marriages end due to the drudgery of continuity. We enter the “long slog” of doing what we’ve always done, to the point where even natural rhythms take on a nerve-racking drip…drip…drip. Even something “bad” might be welcomed to break up the monotony of life. So affairs happen. Addictions begin.

To keep healthy, vibrant relationships, a good mix of discontinuity is needed in the pattern of our lives.

What could that look like in marriage? Occasional flowers would be nice. Weekends away once in a while would be amazing. Even a surprise love note can add a beautifully discontinuous moment to an otherwise way-too-continuous season. Anything that reawakens us to what is real, true, and beautiful about life and relationship can provide the stimulation of discontinuity.

So do I welcome discontinuity, or do I hate interruptions? When God wants my attention, does he have to rattle my cage, or do I lean into his whisper? How about when it’s my wife, my kids, or others who want my attention? When life shifts gears do I look for new opportunities and insights, or am I too busy whining about the change to notice what’s now possible? Do I cling so tightly to the past that I can’t embrace the hope of a new future that is unfolding around me?

If I don’t keep wrestling with continuity, it’s power of persuasion will eventually wear me down and float me gently down the river of comfortable predictability — then over the waterfalls of boredom and lifelessness. We have to fight it!

And for those of us who get somewhat rattled by the thought of change and discontinuity, God has given us the promise that “Jesus Christ is the same yesterday and today and forever” (Hebrews 13:8). God himself is our constant. And when our feet are firmly planted on him, the Rock, it’s a lot easier to stand strong, enjoy the winds of change, ready for the next adventure.

That leaves just one question in my mind. What do you buy Elton for Valentines? 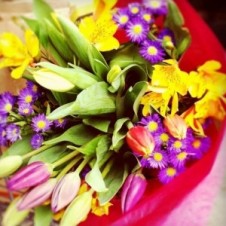 For most people, receiving flowers is quite special. The blend of surprise, thoughtfulness and beauty interrupts their day and warms their heart. The gift is beautifully discontinuous with everything that is mundane and normal about life.

But for Elton, he’s constantly surrounded by flowers. They are part of his normative, to-be-expected, day-to-day reality. It would take something substantially different to positively capture his attention.

Jesus seemed to understand this human dynamic. He knew that people needed to be jolted out of their everyday expectations, so he acted in ways that were beautifully discontinuous to the world around him. He surprised people with conversation and action in ways that completely arrested their attention. He touched the leper, he forgave the sinner, he fed the hungry, he raised the dead, and he spoke not just with wisdom and authority, but with real love.

That reality is captured in a story of Jesus shattering the ethnic and gender barriers of his day by having a conversation with a Samaritan woman. He began by simply asking her for a drink of water, then we read…

The woman was surprised, for Jews refuse to have anything to do with Samaritans. She said to Jesus, “You are a Jew, and I am a Samaritan woman. Why are you asking me for a drink?” John 4:9

And Jesus continued to surprise her, a stranger, by telling her about her life and relational brokenness. That beautiful discontinuity jolted her from the routine of her daily pain and struggle and proved to be a key for her to find real freedom.

We also discover that Jesus taught his followers to live in ways that are shockingly discontinuous to the norms of the world as well. He taught us that by shattering the world’s expectations in redemptive ways, we’ll show that we are truly his.

If someone slaps you on the right cheek, offer the other cheek also.
If you are sued in court and your shirt is taken from you, give your coat, too.
If a soldier demands that you carry his gear for a mile, carry it two miles.
Give to those who ask, and don’t turn away from those who want to borrow.
You have heard the law that says, “Love your neighbor’”and hate your enemy.
But I say, love your enemies! Pray for those who persecute you!
In that way, you will be acting as true children of your Father in heaven. Matthew 5:39-45

When is the last time I surprised someone with a redemptive act? When have I broken free from the mundane continuity of my own day-to-day existence to shock someone with blessing? When, by my actions, has someone thought I look anything like Jesus?

I don’t know about Elton, but I can’t wait until Valentines to surprise my wife. The flowers are coming today.