Is it possible to love people too much? Accept them too fully? 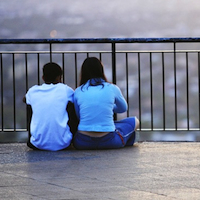 I was recently exchanging ideas with a college-age woman about this very thing. She was expressing her concern over what others might think if we were to fully embrace those still marked by their brokenness or bound by sin. I can relate to her dilemma. Having grown up in the church, I have felt the same pangs of guilt-by-association at various points through my life.

I think the cautiousness she was referencing is rooted in a misunderstood concept from Scripture found in 1 Thessalonians 5:22. The King James Version states that those who follow Christ are to: “Abstain from all appearance of evil.” That reading makes it sound like: “It’s not good enough that you’re not sinning. You can’t even be near sin or sinners, lest it appear to someone that you may have slipped into sin yourself.” Ouch. That’s a tough standard. Yet, I think it’s a fair description of the kind of churched-culture in which I was raised. It wasn’t meant to be unloving, but it made me wary of getting too close to “sinners” or those “in the world”.

1 Thessalonians 5:22 is more accurately translated in other versions of the Bible. The New American Standard Bible, for example, reads: “abstain from every form of evil.” That makes it more about my personal choices than it does about keeping up appearances to avoid guilt-by-association.

Jesus lived in such radical opposition to the rule-of-appearance that he was accused of being a drunkard and a friend of sinners (see Luke 7:34). He was scandalous in his day and culture. How about you and me? As followers of Jesus are we creating love-scandals, or are we more concerned about what others will think?

An unintended consequence of a church culture that is governed by a rule-of-appearance is that it alienates its people from those whom God is longing to embrace: “Keep people who aren’t like you at arms distance.” But if we don’t embrace those who need Jesus’ touch, who will?

As a recovering rule-of-appearance and scandal-averse guy, what suggestions would you give me, and others, who desire to love as Jesus did?